Print a copy of the entire Newsletter

The Annals of Vertebral Subluxation Research published the results of a case study on August 22, 2022, that documented the improvement in quality of life for a man suffering with Bickerstaff’s Brainstem Encephalitis, (BBE). BBE is a rare autoimmune inflammatory disorder that affects the central nervous system and can also affect the peripheral nervous. . . Read More

A patient with a rare and very painful neurological disease, Parsonage Turner Syndrome, was helped by chiropractic care. This according to a case study published in the Journal of Contemporary Chiropractic on August 11, 2022. The National Organization for Rare Disorders (NORD) describes this rare condition. "Parsonage-Turner syndrome (PTS) is an. . . Read More

Child with Sway Back and Back Pain Helped Through Chiropractic

The Journal of Physical Therapy Science published the results of a case study on September 5, 2022, that documented the improvement of lower back pain and swayback in a young girl who underwent specific forms of chiropractic care. The term "sway back" is a commonly used term for an increase in the inward curvature in the lower spine. Other terms. . . Read More

A case study published in the Journal of the International Academy of Neuromusculoskeletal Medicine in June of 2022, documented chiropractic along with rehabilitation helping a woman recover from residual symptoms of a double mastectomy. According to the American Society of Plastic Surgeons approximately 144,000 mastectomies were performed in the. . . Read More

We are conveniently located in the heart of Mt. Juliet approximately 2 miles north of I-40 (just past the railroad tracks) and 2 miles south of Highway 70 (just past city hall). Look for our sign. 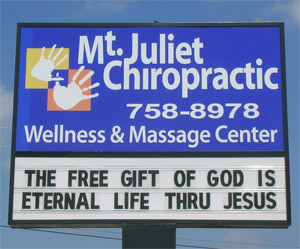